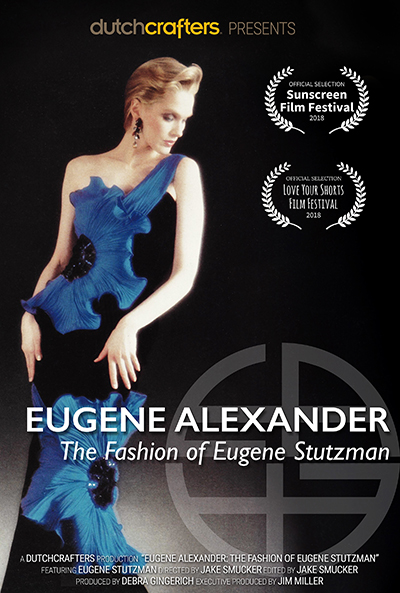 The short documentary “Eugene Alexander: The Fashion of Eugene Stutzman” has been named an Official Selection of the Love Your Shorts and Sunscreen film festivals. Presented by DutchCrafters, a JMX Brands store and the largest online retailer of Amish furniture at www.dutchcrafters.com, the 15-minute film reveals the lasting impact of the couture dresses created by the fashion design team of Eugene Stutzman and Alexander Wallace in the 1980s and 1990s.

Framed by a fashion show fundraiser for The Goshen Theater in Goshen, Ind., the film explores Mennonite fashion designer Eugene Stutzman’s experiences dressing Hollywood customers, his dressmaking inventions used in his factory in Sarasota, Fla., his endeavors after leaving the fashion industry, and how his dresses have a second life through the Eugene Alexander Hope Foundation.

Stutzman, a graduate of Goshen College, Goshen, Ind., stepped beyond the constraints of Mennonite and Amish convention while also drawing upon that tradition for both his style aesthetic and manufacturing choices. Jim Miller at DutchCrafters saw the connection between Stutzman’s choices and the DutchCrafters brand and made it possible for Stutzman’s story to be told.

The documentary was filmed in Sarasota, Fla. and Goshen, Ind. It was directed and edited by Jake Smucker, also a Goshen College graduate.

To celebrate the film’s success, DutchCrafters is hosting a private screening of the documentary at its headquarters in Sarasota, Fla. on April 21, 2018. Those interested in attending can email marketing@jmxbrands.com for more information.

JMX Brands is a niche Internet retailer, selling more than 10,000 different products on a variety of websites, including its flagship Amish furniture site www.dutchcrafters.com. JMX Brands was the Greater Sarasota Chamber of Commerce’s 2017 Retail Business of the Year and a 2016 Florida Company to Watch. The company has earned an A+ rating from the Better Business Bureau and is one of the fastest-growing private companies in the United States, according to Inc. Magazine’s prestigious Inc. 5,000 List.